The concrete on my basement floor seems to be deteriorating. What can I do?

It’s Spring and many people are doing Spring clean-up and moving things around in their basement.  That’s when they notice the floor seems to be pitting and cracking. That’s something that should be addressed, right?  Adam Tracy explains.

Narrator: It’s time once again for the “Crack Man Podcast” hosted by A1 Foundation Crack Repair. I’m Darren Kincaid here with the Crack Daddy himself, Adam Tracy. Adam and The Crack Man Rich have over 30 years’ experience in the construction industry. Rich as over 25 years as the president and founder of A1 Foundation Crack Repair. This podcast provides expert basement waterproofing, concrete repair, and preventative maintenance tips for homeowners and businesses. A1 Foundation’s valuable insight will help avert a disastrous flood within the basement, health problems associated with water infiltration, and protect your biggest investment….your home. The topic of today’s podcast: The concrete on my basement floor seems to be deteriorating. What can I do? 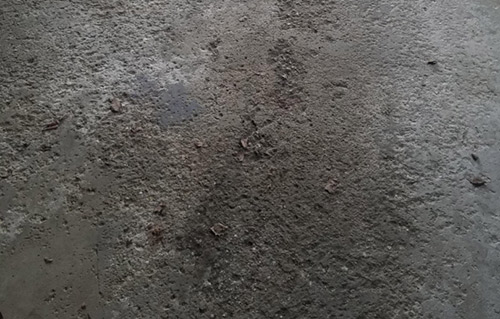 Narrator: So, Adam, it’s spring and many people are doing spring clean-up and moving things around in their basement, that’s when they notice the floor seems to be pitting and cracking. That’s something that probably should be addressed, right?

Adam: Yeah, this is a common time of year where everyone is starting to take all of their stuff out of the garage. This is when we get the calls the most is, on people’s garage is maybe a crypt garage that’s under the house, or a standalone garage. And they’re taking all of the stuff that they’ve accumulated since the early fall, as we hunker down for winter’s months. And they noticed that the floor just doesn’t look like it did in October. A lot of times, what we’ll see is a lot of pitting, a lot of discoloration with a kind of white material on the floor, and then a lot of cracks. And so we commonly get this phone call from customers saying, “Jeez, I started doing my clean-out and my floors’ a mess, is my house going to fall down? Is this something I need to be concerned about? What can I do?”

So, we kind of have to step through the process of what is happening here. So, with a concrete floor, specifically in a garage, generally speaking, the vast majority of concrete floors are non-structural components of the house, right? So if you think of the way the house foundation is poured, you have a footer that goes around the perimeter of the structure, you have the walls which go up and then support the rest of the framing, and then they’ll prime it and then they’ll pour in a floor as kind of the final piece there that will rest on top of the footing that goes up to the foundation walls.

So, in terms of where the weight of the house is located and how the house is supported, the concrete floor, in general, is not part of that structural component of the house. So, when we see cracks on the floor, while they can have lots of reasons for this such as organic breakdown of material – that kind of musty basement smell, you can have insects come through there, you can have water come through there, these are reasons why to fix them, they’re not always necessarily a structural issue right out of the gate. So, in these garages, what we see a lot of times in the wintertime are a couple things, the first thing is this pitting, right, so you used to have a nice, smooth concrete floor, and now all of a sudden, it just seems like it’s disintegrating before your eyes. And you may start to see little stones, kind of appearing in the concrete where it used to be nice and flat, it may just be a lot of, kind of heavy, looks like almost salt on the floor as well; you start to see, kind of all these little tiny pinholes everywhere. So, what is happening? That’s a process called spalling, and the spalling of a concrete usually happens at the surface level. It can happen on the walls, but in this case we’re talking about it specifically on the floor, and this is something that is getting worse with time here. If you had a house that was built in the 50s, 60s, or 70s, those floors generally didn’t have many issues through the decades and you kind of just had a normal floor. But now we’re starting to see the concrete floors spalling and pitting more quickly, and it’s not because of inferior materials or it’s not because they just built it better back then, really the biggest culprit in New England, in Massachusetts specifically, is the treatment of the roads in the wintertime.

So, in decades past, most of it would just be road salts and sand to treat roads for ice and snow, but what we’re starting to do now in different towns and cities is a pre-treating of a brine, and so you may see these lines that go up and down the roads, and we know a storm’s coming in. And what they’re doing there is they’re actually putting calcium chloride down. So, why does that matter? Well, calcium chloride has a lot of effects on concrete surfaces. So, on the asphalt, it’s not as big of a concern because the asphalt can take it. Well, as you drive through your town and they have the brine down, and it picks it up on your car, and then you drive into your garage with wet briny stuff dripping onto the floor, that calcium chloride actually gets into the pores of the concrete and causes the spalling issue. So, we start to see this happening about 10 years ago now, wherein seasonal exacerbating situations and people’s floors are really starting to deteriorate more quickly.

So, what can you do? Once the process of spalling has started, you can’t reverse it, it has already happened. So, you can do one of three things when you have a floor that’s kind of heavily spalled. The first thing you could do, is you could basically ignore and let it deteriorate, this is what most homeowners tend to do because once they realize it’s not a structural component, they just say, “Well, it’s not going to get that bad, I’ll just monitor it over time.” If you just let it go, eventually, you’re talking about a slab replacement because there’s really no way to fix the spalling, you just have to either maintain it or protect it, but if you just let it go, your floor’s going to go eventually. The other thing that you could do, is you could do a skim coat over this, not something that we get into but a skim coat would be a masonry material that goes over the existing concrete and protects it. The challenge there is that over time, especially if you’re using the garage as a garage space with vehicles, is the weight of the vehicles tends to break down that thin masonry material on there.

So, you will start to see some cracking with the material, and it’s something that you’re going to have to do every so often. And then it’s the same issues that you have with the pitting of the concrete in the wintertime, it’s going to happen with the pitting of the skim coat over the top, so a lot of times that’s an option that people consider. The other thing that people do is an over lay of an epoxy floor, so a lot of the very popular thing is getting these epoxy garage floors in here. And though that will protect the base concrete underneath, but it’s something that you have to consider because it is a high cost to do it right. Most of that involves an acid etch of the concrete, and then it involves high grade epoxy that’ll kind of fill-in these void spaces as well as protecting it. Not everyone has that kind of project under their belts to be able to take care of that, so it is a high cost to do something like that. Not as expensive as replacing the floor, but it certainly is an expensive project, and then the kind of the lowest here is just really protecting it. It’s not going to fix it, it’s still going to look the same, but there are materials that we can apply to the concrete that’ll actually penetrate those pores and clog them up essentially safely, so that the salt and minerals of the road materials don’t actually get in there and cause further deterioration.

So, it’s going to look the same that it does now and if you’re okay with it, it’s not going to change, it’s not going to make it look better, but it’s going to prevent it from getting worse over time, and so this’ll kind of survive the slab for a lot longer. The other thing too, that we see a lot in the wintertime is the cracks like we discussed, and part of that reason is because we have heaving in the wintertime. So, we have the heaving of the soil underneath, as well as with the vehicles in the garage, so we tend to see more cracks developing over winter periods in garage slabs. So, those, I would recommend getting fixed because eventually what happens is they start to heave quite a bit, and you have a displacement where one side is higher than the other, and that can be a much more expensive fix than if they’re flat across. So, usually, the little bit of spring maintenance to your garage floor may involve protecting the surface to make sure it doesn’t have additional spalling issues, and it may involve actually sealing these cracks, again, to survive the slab for a lot longer.

Floor replacement is a very expensive and disruptive process, you’re involving jackhammering out the floor and getting concrete truck in there and lots of equipment, so if you can prevent that by doing some simple maintenance every few winters, generally, you can survive it for a lot longer period of time, and it just becomes a non-issue over time.

Narrator: Thanks Adam, for explaining what can be done about pitting and cracking on the concrete floors.

Narrator: If you have a basement water problem and think you need a professional, or, if you’d like more information on foundation crack repair and basement waterproofing topics, please visit A1FoundationCrackRepair.com or call Rich at (866) 929-3171. Or you can email Rich at info@a1foundationcrackrepair.com. Thanks for listening and keep that basement dry.